Stations of the Heart

About Song and Silence

"I don't like the way you played the first phrase ... you seem to sit on that first note. I know Chopin marked it a quarter and the tempo is lento, but you have got to make it to the second note, cheat the note values a little, anticipate the second note, and incidentally, a big accent on it when you land. It's a poignant moment. One note in isolation means nothing. It communicates nothing. It's the interval, the relationship between two notes and how you move from one to the other that creates an emotion. In this case it's the interval of a fifth. Well, make it leap. One note vibrating alone has no power to move you or me unless it is joined to another note to establish some kind of relationship between them. Make them sing together."

Effortlessly, he played the first phrase. The music lifted out from under the touch of his fingers and filled the room. He played it very slowly, with great sadness and great simplicity. Only his hand and wrist moved. His body remained motionless, the shoulders sagged over his sunken chest. His head was bowed, his eyes closed, and his chin almost touched his chest. His free right hand rested limply on his knee. As he played he made a rough sound inside his throat, almost a moan, which seemed to force its way out of him as he felt the music rise inside.

When he played the phrase a second time, on sounding the second note, he lifted the palm of his right hand in the air and the upturned fingers shook in emphasis. He turned his head on its side and strained his ear toward the keys. Then he repeated just those two notes again, this time looking at Danielle as if to graft the sounds onto her mind, raising his eyebrows as the music lifted again toward the second note, his body articulating his thoughts....

Now, with seasons of time between herself and that moment, Danielle heard.

One note in isolation has no meaning. It communicates nothing. One note vibrating alone means nothing.

Out Of Print.
Please check the used books section of the following websites:
Indigo (CA)
Amazon (CA) • Amazon (US)
Barnes & Noble (US) 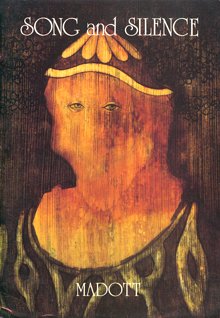